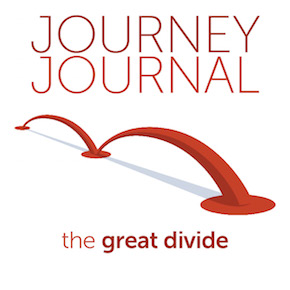 For a few memorable years, my office spanned the great divide. I’m not talking about the Grand Canyon or even Triple Divide Peak in Glacier National Park. Oh no, this geographic rift was far more monumental.

I worked directly on the borderline between B2C and B2B.

In those days, my agency offered both B2C and B2B services, and my office marked the separation line between the two groups. In fact, I was the only individual on staff that worked on both B2C and B2B accounts, so I saw the best and worst of the two worlds.

It was a tumultuous time. One moment we were concepting a fashion insert for a boutique retailer; the next we were producing a plant video for an industrial parts company. Through it all, I learned just how expansive the gap was between the B2C and B2B experience.

So, based on that unusual history, where do I stand on the never-ending debate between B2C and B2B creatives? Which discipline is more challenging?

To settle that argument, let’s revisit the great divide.

Life on the B2C side

My mornings were usually devoted to the agency’s B2C group. The B2C creatives spent their days juggling fashion, housewares and retail accounts. They dressed impeccably, talked loudly and lived for photoshoots.

If you went to lunch with the B2C team, you could expect a 2-hour Robert Altman style talkfest at Wishbone. Most people ordered salads and no one finished their plate.

From the outside, it seemed like a charmed life. On the inside, it was a different story.

The work was extremely challenging. After all, it takes a special skillset to compose and capture the defining image for an entire fashion line or product category. It also requires a deft hand to evoke a lifestyle in three or four words.

Life in the B2C group was truly about creating and selling an image that people could identify with or aspire to. The work had to be immediate, compelling, original and memorable.

Often, I hear B2C campaigns described as “style over substance,” particularly by B2B creatives. But that’s not accurate. Not even close.

I would challenge my worthy B2B colleagues to try creating a truly differentiating B2C campaign for a commodity item like laundry detergent. And please, don’t be fooled by the apparent simplicity of the creative approaches you see in the market. The end result may seem like a seamless execution, but it took a monumental effort to get there.

In short, the fashionable, brand centric, image conscious world of B2C is a beast.

Life on the B2B side

When my mornings on the B2C side were over, I crossed the great divide and entered the agency’s B2B group.

If you went to lunch with the B2B team, you could expect a half-hour “grab-n-go” from a West Loop taqueria. Most people knew the owner and everyone finished their plate.

From the outside, it seemed like a clinical life. On the inside, it was a different story.

Like B2C, the work was extremely challenging, but in an entirely different way.
The B2B learning curve was precipitously steep and the nonstop maelstrom of facts and figures could be daunting. After all, it takes a special skillset to convince a head engineer to reconsider established processes and entirely overhaul their R&D infrastructure.

Life in with the B2B group was truly about finding the human side of complex business stories. The work had to be intelligent, genuine, original and relevant.

Often, I hear B2B campaigns described as “technical or boring,” particularly by B2C creatives. But that’s not accurate. Not even close.

I would challenge my worthy B2C colleagues to try creating a truly compelling B2B campaign for a new brand of industrial air purifiers. And please, don’t fall into the trap of making the science the hero. You need to connect with your target’s pain points and objectives, and it takes a monumental effort to get there.

In short, the complex, ROI centric, sales oriented world of B2B is a beast.

Now that you know the backstory, let’s settle the debate between B2C and B2B creatives.

In the end, which discipline is more challenging? Both. I know what you’re thinking,
but that answer is not an evasion. It’s a fact.

Creating differentiating B2C cost me half of my hair. Creating relevant B2B claimed the other half. Both B2C and B2B will push you to your creative limits and teach you think from your target’s perspective. And despite their surface level differences, both worlds actually have a surprising amount in common. That’s why there should not be a great divide in our perceptions of the “other side.” It’s time to close the gap.